Most people think that the Trumpet Creeper Vine is at the very least a nuisance. This is unfortunate since most do not know its part in supporting the ecosystem. Yes it can take over an area pretty quick but with a little due diligence and strategic bushwhacking it can be keep in check. The upswing in doing so is a very beautiful vine and a hummingbird magnet. Here are a few pictures I took with my Canon G3 several years back of this one misaligned vine.

I was making a delivery several years back when I came across these understated yet beautiful roses. The fence in the picture looks like it is old but is in fact old wood used to make a decorative accent to a small flower garden. I used my now unusable PowerShot G3 in this shot. I miss my G3 and am glad Canon fixed a design flaw it had on the later generation PowerShots. I am however looking for a way to fix it but  I am happy and feeling blessed  with the cameras I have. So here is some Roses along the way. 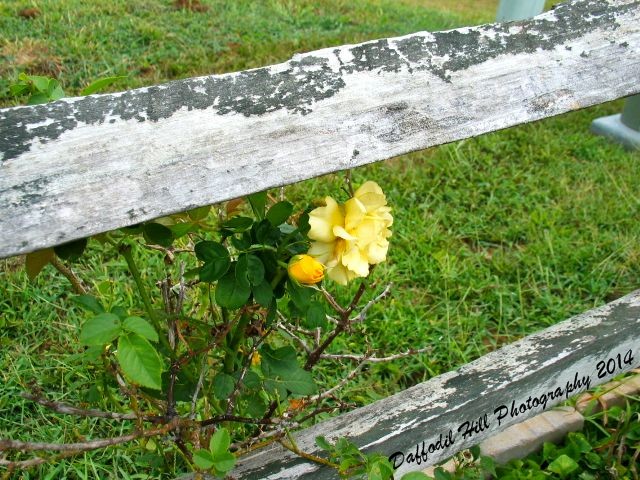 The past year has been a difficult one for some of the folks in my community. (For the record it does not matter if it is my online community or those I see daily). Life has been quite a bit like, well life, and it seems to be the gift that keeps on giving.

The last several days have been productive around our place but in that time I have visited some of my community in the hospital and at a nursing facility. Not much time left I am afraid for new captures. So I went to the way-back-files for something to share. As I was looking I found this capture from my old Canon G3 and it sang to me. May it sing to you as well.

Below are four captures I took this afternoon of the Daffodils on the Hill. Two of the photos I used my Canon Powershot G3 and two my new-to-me Sony A300. On most of my photos I use Microsoft’s Digital Image Standard 2006 Editor for some one-touch editing/love if I feel it is needed. All four have had the same one touch ” love” applied to them. I have been shooting, since my introduction to the digital world, with point and shoots almost exclusively. I am new to the DSLR world and must admit I take better portrait photos with them than my point and shoots. I feel I take better nature shots, both micro/macro and broad spectrum captures, with my point and shoots. Also it is easier for me to carry around a good point and shoot than my DSLR equipment.

Other than ease of access and size cost is a big issue. I know first hand that DSLR equipment is expensive, well at lest for my budget. I have been able to gather five point and shots for the less than , though just barely, my Sony A300 body alone. With the lenses added in I have come in at about half of the cost for with my point and shoots! There are many opinions, both pro and con, for both formats but I have just one question in this DSLR vs Point Shot debate: Can you tell which camera I used on which capture?

Since the rebirth of my PowerShot SX260 HS from its water grave I have decided to use it sparingly. While it rested on rice I used my repaired-by-me PowerShot G3 in its stead. In that week or so I started to  realized how truly awesome this little camera was and still is. So here is a little four megapixel love. Enjoy!

I recently acquired a Canon PowerShot G3 for a song. I had a lovely little Nikon CoolPix 4600 but half the manual functions stopped working. I gave it to my sister-in-law and it still makes a great every day point and shot.

But I like to dabble with manual controls so I turned to the G3 when I could not find another 4600. Here are a few pictures I took today on my way home from work. I am experimenting with macro photography taken with the zoom only. Here are a few attempts plus one. Enjoy!

The Canon PowerShot S3is has been a faithful companion in my journey through the lens. I recently purchased a Canon PowerShot Sx260 HS that was quickly becoming my main weapon of choice in this journey.

Several weeks a go a good friend told me she was letting her daughter use her Canon SX10 this summer. I told her she could us the Sx260 HS since she likes journeying through the lens as much as I. Actually a little more than I do I belive and knew NOT having a camera was, well a cruel but noble sacrifice.

So as my SX260 heads out and about to parts unknown I turn back to my S3is and a used G3 I picked up a few weeks back. Here a few I took recently. Enjoy!