I spent a little time at the lake with The Bride this past Sunday. The Sun was out as well as the locals, both two leg and otherwise. Here is one of the later, an Embden Goose, who I think have the most beautiful eyes. 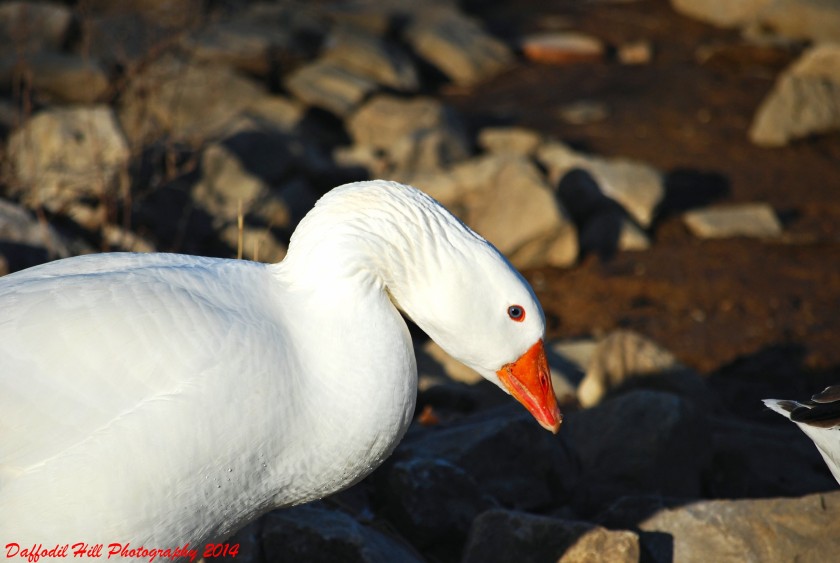 I was having a hard time coming up with a name for the post. After examining the picture I decided to call it what it was: A Beautiful Bronze Aqua Dispensing Device!

Yesterday I published a post with three photos of feathers. Each photo was taken as a Macro and I used a different camera on each one. I will introduce each camera below the corresponding photo. My hope is to show people who think you must have the “latest and greatest” that they are truly missing out on the simple joy of photograph.

The 4.1 mega-pixel Minolta Dimage S414 was released in early 2003 and is a fun camera to use. The controls seem “wonky” compared to today’s cameras but none the less it is a solid piece of technology.  Or as Minolta put in the press release: “The new DiMAGE S414 combines high quality images and automatic features, allowing users to obtain the best photographic results with easy camera operation,” said Jon Sienkiewicz, vice president of Marketing, Minolta Corporation’s Consumer Products Group. “It’s the ideal digital camera for a variety of applications and users — personal or business, from novice to enthusiasts.”

I purchased this camera online for around twenty bucks with shipping. Back in 03′ the camera listed for $399.00 so twenty bucks was a bargain, No?

As the caption states on the above photo I have a new-to-me camera. It is a Nikon D60 and I took this “Macro” using the long end of a 55-200mm zoom lens without a tripod or mono-pod!

The D60 was released the early part of 2008 and has a10.2 mega-pixel sensor. Since this is a true DSLR it is feature rich and to my mind a lovely piece of photo technology. The down side is the auto-focus will not work with all Nikon lenses due to the motor being inside the lens’s themselves.

I bought this camera off craigslist, and I had a great experience…this time, for three-hundred dollars. It came with to lenses, battery charges, owners manual, USB cord and two batteries. The Nikon D60 was released as a one lens kit back in 08′ for around $750.00.

The Nikon Coolpix 5600 is an interesting camera in so much as it’s size not it’s abilities. The camera easily fits in the palm of my hand yet renders amazing results when used to its full potential. It is a solid little camera all around.

Just a side note: Though I will be using photos I take with my D60 from time to time the majority will still be of photos taken with my point and shots. I feel it is the walk, the communion with made and created things and the joy of sharing that is important. Truly it is not the equipment but the journey. And remember my number one rule: (When its’ safe and legal) simply Take The Shot!